The soaking that London saw on Sunday the 3rd merely added to the pandemonium that was the Queen's Diamond Jubilee. The density of the rain and the fifty people on board was a stark contrast to our departure from Plymouth.

We entered the lock at Sutton harbour at 17:30. We had closed the boat to the public half an hour before so naturally what ensued was a mad dash to stow everything in its proper place and get the Matthew of Bristol ready for sea. Ropes were coiled, gangplanks dismantled, loose items securely stowed, fenders set, and yards cockbilled in front of thousands of Plymouth pirates that hoarded around eager to watch us set sail. This mass rabble was headed by Jack Sparrow and sir Francis Drake and his missus.
As we pulled off from the quay, a pear shaped Plymouth wench started a rousing call of 'Oggy oggy oggy!
The crowd responded. 'Oi oi oi'. Then to our amusement she forgot the next verse which is in fact just Oggy!
After stowing the tender and sailing close in to the barbican for a final look at Plymouth we headed off to begin the penultimate leg of our jubilee tour.

I had started to cook up a Bolognese for dinner when the VHF set crackled into life. A yacht within a few miles of us had put out a PAN PAN call as they had ran out of fuel in Bigbury Bay.
We offered to assist and sell them some fuel, have a look at their engine and hopefully send them on their way.
Now this was exciting. A nice little detour to aid our fellow mariner.
As we didn't state what sort of boat we were it must have been extremely amusing for the stricken crew as it became apparent the great big pirate ship approaching them was in fact the boat going to help!
I wondered how we could confuse them even more so I suggested that we all got naked...

'Shut up and cook' and 'piss off' were some of the responses I got.

We got to work dropping the canvas and cock-billing the yards to come alongside. When we were less than a hundred yards away and still fully clothed the RNLI turn up from out of the sunshine to take all of the glory and to tow the yacht back to Plymouth.
Swines!
I pondered for a little while just how often the RNLI are called out because of boats with no fuel. This along with engine failure are the most common call outs for the RNLI. I imagine this would be annoying for the crew scrambled to deal with an easily avoidable incident. On the other hand it must be better than being called out to a fatal accident. Because no one wants that.

We broke in to our watches. Me, Paul and Robin on Team Old Farts and Rob, Jon and Sarah on Team Young Guns.

We made good progress by Start Point. I am very familiar with these lights, flashing 3 times every 10 seconds. They continued to flash away behind us as the stars flashed above and the phosphorescence below.
A good watch, we turned in and eventually arrived at anchor in Lime bay.
Breakfast and away again.
We set the canvas and turned on some Frank Sinatra. Another day in the office.

Rob had timed the tides perfectly and we took Portland Bill at 10 knots!
In two days we passed by Swanage, the Isle of White, listened to old radio shows of Dad's Army to wile away the graveyard shift by the South Downs.
The weather began to turn at Dungeness, the wind slammed our bows and the canvas came down. I no longer cared, I was beginning to get tired and Ramsgate was just around the corner.

Throughout the trip the best wind we got was a beam wind that kept threatening to creep up behind us and allow us to turn the engine off. The watch changes seemed to occur at each new headland and with each hand over we would say it would improve around the corner.
This would have indeed been true if we were going the other way. As it stood it crept more and more onto the nose and our progress declined along with the weather from Dungeness. It didn't seem to deter the dolphins.

We had left thousands behind us in Plymouth basking in the sun or dancing on the promenade. We arrived in Ramsgate in driving rain to a pale looking populous caked in make up, tattoos or both.
Sacha rejoined us as we arrived. He was due to leave with us in Plymouth but was delayed. What greeted him was a tired and slightly underhanded crew for the trip we'd undertaken.
I'd not seen Sacha for over two months having messed up my spine in Fowey. He'd had quite a time of it whilst on land and we shared yarns over a crap pint of what I assume was piss in the Belgian bar.

We offloaded all items that were non essential to our Jubilee jaunt. A mismatched bunch of well wishers known as The Maritime Volunteer Service offered to take it to Sandwich for our planned trip there after the Queentastic weekend ahead.

Ramsgate always throws extremely useful people in our direction. One such person was Mike. He took me victualling in the grossly oversized Tesco's for the journey ahead with passengers.
He offered the use of collapsable chairs from the Maritime Museum in which he has just been appointed Master and Commander. Me and Jon were given a tour of the closed museum and I highly recommend swinging by if ever you have the chance, or indeed, any inclination to go to Ramsgate.

After picking up a buoy at Gravesend and feeding the masses some Cassoulet followed by Rhubarb Custard, we picked up the tide and headed to London.

The crowds of over one million people could be heard cheering as the approaching bells on the belfry that headed this vast flotilla drew nearer. This was a fine start to a pageant hosting well over a thousand boats of the commonwealth.
As the noise of the crowd grew to a din I took half an hour out of my busy day to clamber up the rigging and get the best view of the flotilla.
Martin one of the crew was already standing on the yard. 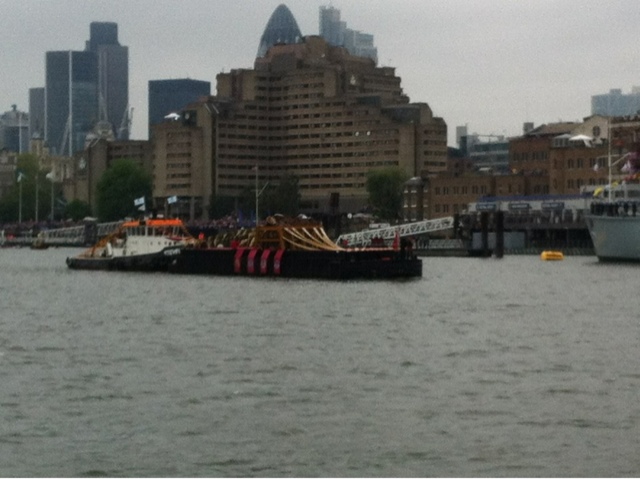 There had been a break in the weather, yet as soon as the flotilla reached the boat it pissed down.
It didn't stop all day and night.

We had welcomed our 40 guests and media crowd in the morning. Rob got a safety talk out of the way and introduced the crew. Rob was the captain, Sacha the first mate. Martin a stalwart deck hand and trust member.

I was made known to the guests on board as Cook's Assistant.

Seven years of unfaltering service, my first trip to Dublin I had cut my teeth as Chef. A Boatmaster's certificate, a Yachtmasters, over 15,000 sea miles and trained to STCW standards at Warsash Academy for my time with Trinity House and I'd finally reached the dizzying heights of Cook's Assistant. 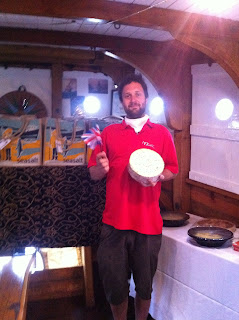 The cook for the day was the lovely Ann. Her logistical prowess and home-made cooking (especially the cakes) are unrivalled. She saw my smile quickly fade at my new rank and dashed away to the stern of the boat. 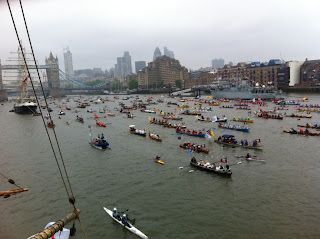 The Flotilla in full swing

We played host non-stop for 9 solid hours to the Royal Lord Leftenant of Bristol and friends. We served them cloved ham, peppered beef, Scottish salmon. We made them tea and coffe. We served them alcohol. We cleared up after them. We doubled over to serve their every whim. We ran out of water.
I resorted to using rain water collected in the canopy for the washing up. Luckily it rained so hard as everything we had was washed up, by me, twice!

Finally the Water taxi arrived to collect our valued guests. We spent four hours clearing up.
I went to bed beneath the newly formed waterfall above my bunk. I woke up feeling like London had shafted me body and soul.
I got on a bus. Fell asleep and awoke dribbling to a sunny and serene Bristol.
God Save The Queen, and All Who Sail In Her.