The wind kept up a steady force 2-3 for the remainder of the day and dropped slowly but surely throughout the night. I awoke to take charge of my windless watch with Jon and Mike. The same haze from the previous day melted the horizon and sky together, only broken by the race fleet around us and an occasional sea bird dipping into the glass like ocean.
The monotony of being in irons and going nowhere was getting to us. It's hard to keep up morale with nothing going on. At least we're on a boat and that means that there's always something to do.
We moved about some rope, tidied some other bits of rope and hauled on the big bits of rope. Maybe we were hoping to find some wind hidden within all of this manilla and hemp.

It seemed that hours had passed, the reality was that it wasn't even one hour. Mike helpfully pointed out that there was nothing to see or do. Just then, a whale's spout burst out of the sea not 20 meters from our port side. The fine mist dropped straight back to the water's surface. Like a pathetic geezer, straight back down with barely a ripple and no breeze to carry it. The cetacean's lethargic sigh, however, got our attention. Within seconds this gracious animal swam right underneath the boat, barely beneath the surface of the water. This majestic black and white mammal, travelling lazily alone to a place I'm not even sure he knew he was heading. We watched the sea in the direction he'd headed hoping to catch another glance. Hoping to bury another five minutes with something less boring than steering a boat that's going nowhere. Then the spout of mist broke the horizon once more, only this time there was a wind to carry it. The morning sun had begun to rise higher, bringing with it an offshore breeze as it heated the green hills of Southern Ireland. 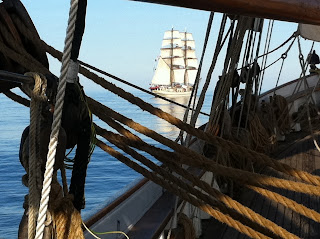 Frustratingly we could see the ripples of the wind on the water, yet it was still half a mile ahead of us. We were still at the mercy of the tide and that was still half an hour from being favourable.
I took a bearing from the point on the land in which the wind was coming from then went to the chart
to see how long it would take until we got there. This is when I saw that during the previous watch and the start of ours, we had been pushed backwards just over two miles by the tide. This was massively frustrating. It looked as though we were about forty minutes away from the breeze, we were only half way through our watch and all bored out of our minds, oblivious to just how lucky we actually were to be there in the first place. Ahead of us, the larger ships in the fleet began to fill their sails, albeit pitifully, and make lazy progress towards the checkpoint.

The checkpoint. We were to find out very soon about these. It was every boat's obligation to call in daily with the boat's position, heading and with any useful information. After talking to 'Race Command, or Race HQ or Race Whateveritwas, we were then asked, 'We assume you have successfully managed to reach waypoint one?'

Following this was a pause, this consisted of me looking at Jon, Jon at me, his face as blankly bemused as I felt.

My response was not a lie, I was affirming their assumption, not the fact that we had crossed a waypoint. As for being on course for number two, well we still had time to find it.

'So. It seems that there is a course to follow.' Said Jon.

'Yes Jon, it seems that you are right. Where are we going?'

One might think that we'd have known about these waypoints before setting off. One should be right however this was one of those things that Leslie placed in the 'Nonsense' section of his elaborate, ageing and eccentric mind. The plan to get over not knowing exactly where we were going was to follow the fleet. When the masses change course, so do we. Simple. Winning this race was never a realistic option for Irene, but we had the will and whim to do the best we could, a steady twentieth would be admirable for the old girl. So this is what we would do. 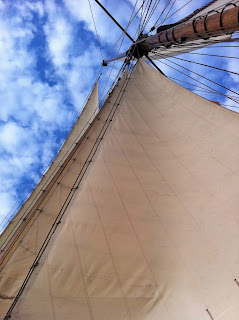 The breeze tickled the rigging and sat softly in the sails that we had centred so that the booms wouldn't sway on the swell of the sea without the wind to hold them rigid. Before getting the chance to sheet out a little Leslie emerged from his cabin.

'Why the fuck aren't we moving? Sheet out! How long have you been sailing like this for? We should be miles further!'

So unaware he was that he had arrived with this feint breeze. He stayed for a while and set the sails, grunted something in oldy worldy talk and went back down below. Oh well, we're steadily moving ahead and catching up with some more boats.

A steady course of East was adhered to as this seemed to be where the fleet was going. As they funnelled closer ahead of us we would know that we were close to the waypoint.

Leslie reappears, dressed and ready for the day, crumbs in his beard and the froth of a good morning coffee adorning his moustache.

'Why the fuck are we heading East?'

'...er, because apparently in that pack that you once had with the race rules in, there were a list of waypoints. We don't have that pack so we're following the fleet for the second marker.'

'Bollocks! It's a race, we want Greenock, that's North, so head North!'

The rest of the crew either began to arrive to take on their watch or simply enjoy the morning's sailing. The wind was rising to a force 4 and from the beam. Perfect for Irene. No one would believe  us that there had been no wind and that we'd actually gone backwards in the night.

Sacha arrived and asked why we were heading North when we agreed to follow the fleet, I nodded to Leslie.

'I know Sacha, but we're going North now, waypoint two is a write off, let's find if and where number three is and actually hit it.'

So I hand over the watch to a tired eyed and grumpy Sacha. The sun warms up the deck and we sit and soak up the joy of fair weather sailing.