Throughout the day up to around 1500 hours, the wind had crept up and Irene was maintaining a healthy amount of progress Northwards towards the finish line South of Burrow Head Lighthouse.

The Isle of Man was in view on the Starboard Bow. If we maintained our present course we wouldn't make it past so it was time we put in a tack. Usually this is a nice and simple manoeuvre.
One turns the helm position to bring the bow into the wind. When the boat is facing into wind the sails will flap about until the boat has said wind on it's opposing side. As the boat comes through the crew ease across the foresails. The mainsail can look after itself until it is tweaked to make the best of the wind angle.

As we began our tack and following quite a hefty cracking noise, the crew working on the fore sails were showered with bits of oak and leather. I looked up to see the heavy gaff swing out of it's position next to the main mast and bury itself into the shrouds on the port side. 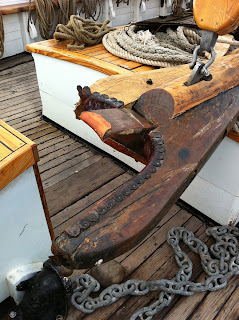 We cannot move  the mainsail and it is stuck in a way that continues to power the boat forwards towards the Isle of Man. We are roughly four miles away and making about 6 knots. We have about 45 minutes to fix this.

Obviously we need to be fast, though there is a lot to be said about taking a few moments to breathe in and assess the situation by taking a step back and having a head scratch.

Our trouble seemed to be that we needed to dislodge the gaff from the shrouds before they were stretched to their breaking point or their strength became severely compromised. After all of our work tightening the buggering things!
This all has to happen without ripping the mainsail or damaging the boat further.

We get down the topsail and stow it out of the way. Then after trying a few ideas and failing or making very little progress towards success we stand back and come up with plan D.

I was sent up the mainmast to cut free the sail from rings that send it up the mast.
The gaff itself was being held up with halyards. Though as it's pushing forwards so hard against the shrouds it isn't as easy as simply lowering it on the halyards. We need something to pull the heavy gaff aft in order to free it and gain some control over it's descent.

'Okay guys.' cries Sacha.
'We've got 8 minutes until we reach the Isle of Man.'

To this thought Sacha adds, 'That is 8 minutes until we HIT The Isle of Man. Well, 7 minutes now.'

Ah. So we really have 5 minutes in order to slip by comfortably. We rig up a block and tackle system to the end of the gaff and take the line as far aft to the starboard quarter cleat as is possible and whilst two people ease the halyards, the remaining crew heave as hard as they can on the tackle.

It works! Bit by bit the big lump of wood came down. The gaff gets stowed out of danger on the deck and we can finally complete our tack, leaving the Isle of Man well clear on our windward (Starboard) beam. The kettle goes on and the off watch are sent below to finish resting up before their shift.

The beauty of the Irene and indeed a lot of Gaff rigged ketches is that so long as the rig is balanced then she will sail well. So we raised any foresail that had been lazy and found that with just the fore sails, the mizzen and mizzen topsail we could maintain a reasonable speed. Obviously we would love to have all canvas hoisted but without a gaff this is impossible.

We didn't rouse everyone from their slumber during this event as there was only so many people that were needed. There were quite a few confused looks when people came on watch yet none of disbelief when the tale was recounted.

But why did this ever happen? The short answer is that the gaff itself is bigger than it was ever intended to be. When originally built the spars and booms were much thinner and lighter. The amount of force placed onto the jaws was too great and they snapped under the pressure. It has happened before and has happened again since.

The rest of the trip to the finish line was joyfully uneventful. So joyful that we decided we would make the best use of the wind and sail about to while away the evening. Then make our way to the anchorage at Lamlash Bay where we could get some well earned rest. Of course that was wishful thinking.