Taking a boat to Scotland is a thing that everyone should do.
We passed Isla Craig, a stumpy little island that Eric informed us in between his “Bips” and “Bops” was where they mined rock for curling stones. He then shouted “Liverpool Maid!” Grabbed a bit of tattered rope and scuttled away to dump it with the rest of his 'Maids'. 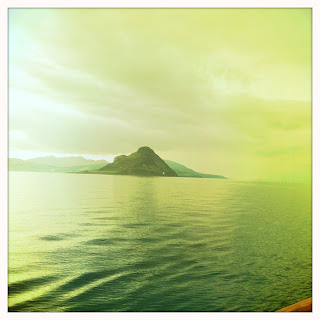 As you pass this island the rich green mountains rise into the clouds on either side of you. An early inkling of Scotland's barren beauty.
Ahead of us we see the Isle of Arran and Holy Island, our gateway to the anchorage. A beautiful spot. Many other Tall Ships agreed as the bay was chocked full of the race arrivals.

The anchor on Irene is infamous. It's huge, the chain is heavy, the capstan is cumbersome and the whole affair of anchoring is a monotonous ignorance to a hundred years of development in this field.

After a look around Leslie decided that he would like to anchor away from the crowded fleet, nestled at the foot of a valley. Was there a reason that over a hundred boats packed in together decided to ignore this part of the bay?

It's because when the tide goes out, the beach is very much all that is there. The bay is a deep 27 meters until very quickly it steps up to a drying height of 1.2 meters.

Leslie hands me a plumb line to check the depth with.
'As soon as this touches the bottom drop the anchor.' He says with a condescending grin.

I look at the line I was given as if I've been given a tooth pick to unblock a toilet.
It is a heavy weight on a 5 meter chord. When this is on the bottom it would be too late.
Leslie turns his back on my insistence to the flaws in the plan and returns to the helm. Periodically asking whether the plumb line is on the bottom yet followed by questioning if I'm doing it properly!

Then the plumb line finds the bottom at the same time the hull does and we stop suddenly.

'Is it on the bottom now?' Cries Dr. Morrish

'Then drop the anchor'

Jon hits the bar holding the anchor to the vessel with a lump hammer, the chain whips from it's neatly flaked stowage on the deck. Well about 5 meters of chain does which is accompanied by a half splash and a loud yet hollow clunk.

'Is it down?' bellows Leslie as from behind him two safety boats are approaching with great speed.

We look down to see half of the anchor protruding from the water.

'Umm, yup, definitely down, but sort of almost up as well...'

The safety boats are now alongside asking if we require a tow out of the mud. We have well and truly grounded on the top of a spring tide. If we cannot get off tomorrow then we may be here for 6 weeks.

Leslie declines the offer of a tow saying he much prefers the view here. Sacha gets on to the VHF Radio to let the coast guard know of the situation. So leaning over the rail to the RIB Driver he asks...
'Ere mate. Whats this part of the bay called?'

A pause and then a beautiful reply that I shall never forget. 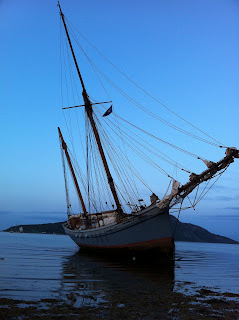