The Death of Enza (and my part in her demise) Part 3. 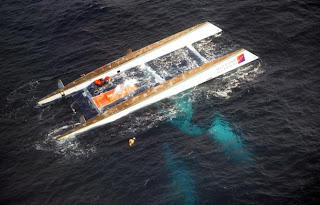 My heart is pounding so hard at those words that I'm sure I can hear it through the sea. We're watching someone float away from the boat, lifeless, helpless, face down. Who was that drifting away, too quickly for any of us to do anything to help? I do not like the taste left in my mouth at the thought that it is impossible to try and get to them, therefore I won't even try.

To rationalise this is difficult when seeing a close friend drift away. Be they conscious or not I would not go after them. Wow. I hear myself thinking this, it is against every grain of me that I wouldn't even try. So selfish. Though were I to swim out to them it would be two dead people. Or in this case just me, as it soon became apparent that it was an unoccupied survival suit floating away somewhere towards the open sea.
For now this was good news.

Now I don't like our situation anymore than Sacha or Luke, why should I? At least there are three of us still here, still holding on and still uninjured. This is something worth carrying on for, this is our impetus to survive if nothing else. No one's dead until you know they're dead.

Luke had managed to set of his PLirB (Personal Location Indicating Radar Beacon).This is an astounding device designed to alert a shore base and/or a ship of a man overboard or an on board emergency situation. A device that I believe triggered the process of saving the lives of those on board that day.
When the beacon is triggered (manually or automatically in some conditions) it transmits on the 406Mhz global satellite rescue system. This system has world wide coverage. It also transmits a 121.5MHz homing signal as well as a GPS signal. This can be accurate to within 50 meters.
This signal was picked up at Falmouth. They then call whoever the beacon is registered to. For PLirBs they are registered to an individual; in this case Luke's dad. I can only imagine upon reflection just how worried his parents must have been. They would have been informed that their beacon had been triggered somewhere in the Bay of Biscay and asked if this was where it should be or a false alarm. Unfortunately this was correct.

As I later found out, it wasn't until two hours after setting off our emergency beacons that any signal would be received. It was picked up by Falmouth at around 1900 hours. Luke's parents would be in for a long wait. As would Luke, as would I, as would we all...