The Irene has a reputation that precedes it. A highly charismatic boat with an even more charismatic owner. In his book 'Good-night Irene' Dr. Leslie Morrish takes less than five pages before he tells us he put the bowsprit through a bridge in London disrupting gas and electricity to many thousands of homes. Not much later and you can read about the cat that shat in his pillow case and consequently was last seen sinking in the Thames Estuary.
Ask anybody that has sailed on Irene and you'll hear many tales. Skippers have been forced to stamp on their Pith helmets in despair. The boat has collided with yachts, yachts have collided with the boat. It has grounded multiple times and has even burned down once.
With a brief charter career in the Caribbean Mick Jagger played upon her grand piano.
She has led a colourful life indeed. In her wake is a succesion of great voyages, mentally disturbed skippers, irritated crew and confused harbour officials. Yet for each folly is a feel good story, this is the start of mine. Of my time on the boat that refuses to follow the path of other, similar boats and shout EFF YOU to convention and sometimes even reason. 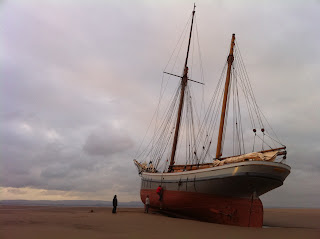 'Irene' Grounded off Cleavedon in 2009


'It's looser than a Dutch woman in a window.'

With these words I had given to myself the first job aboard the 'Irene'. Tightening the rigging.

Setting to it with some good old fashioned swaging (or sweating, or heaving, or grunting), one person pulls on the halyard like a bastard, the other is 'tailing' the rope to pull in the slack. We used the halyard usually kept for lifting the heavy gaff that pulls up the main sail. Burly enough for the job so as we don't have to be. Perfect.

Once we'd pulled through enough line to tension the rigging we lashed it to itself in four places with marlin to stop it from slipping. Once done we move to the opposing shroud, slowly heading aft down the boat towards the stern until all eight shrouds are nearly bar tight.
This job took all day, firstly because like anything else on a boat, it is worth doing properly. Secondly, by the end of the day we had had quite a bit of wine.

Sacha and I had arrived in Waterford the previous evening. Sacha as first mate and me as his second, in my usual thankless job as the feared and despised, common ground of hatred and irreverence, the Bosun.

Upon arriving in Ireland we had been struck with festival fever, the Tall Ships were in town. Illuminated masts reached high to tickle the cloudy skies of Southern Ireland. Boats buzzed with excitement as crews made up of professional sailors and youngsters 'living the dream' for the summer drank hard. Shining brass bells and trims danced light onto the drunken smiles of kids eager to slip their ships lines and compete in and win the Tall Ships Race 2011.

I met the owner Leslie. He was pleased to see us, for this boat was lacking any experienced crew. There were people on board more than capable of sailing, yet sailors they were not.

This situation had led to an odd discipline on board where a completely unexperienced crew member had appointed himself Bosun, Second Mate and First Mate.

There was a sense of ill feeling for this man that I had yet to meet. The crew spun stories of his incompetence and poor manners; of his sense of superiority that descended to childish humility when his orders were implemented to various ill fated ends.
Unfortunately, through his callow ideals of what it means to be a mate at sea he had assumed that he would be 'liked'. Decisions made for the greater good of a boat may not always sit well with others.

He thought too that he could be respected. Maybe, though this comes with the experience and reason that is applied to decisions to do no more or no less than is necessary for a safe and speedy passage. To simply guess at what to do and for it to be unsafe and to waste everyone's time will earn you no respect. The only good that will come of you is that you will bind the masses to a general opinion that you are a complete dick.

However, 'he's new to this', thinks I.
'He's showing gumption and filling the void', surely.
'He can't be as big an arse as they say', can he?

2am and I'm sound asleep. The day's travelling has taken it's toll and I had long ago slunk to bed to be fit for duty the next day.

I awoke to find a beard with a Canadian accent and a flatcap poking me and looking at me through glasses belonging to the 80's.

This fellow starts reeling off a jobs list for me to start in the morning. I thank him for this by grunting that he should bugger off before he gets lamped. I can see already that we are going to get along fine...