If you are a touch deaf and generally uninterested in anything other than your own affairs, then from time to time you may get a few things wrong.  For Dr. Leslie Morrish this was when the Tall Ships Race people asked for their money.
It is only after the ha'penny clunked into place that Leslie realised it was in fact Irene that paid to enter the race, not the race paying Irene.

If you are a touch indignant and generally uninterested in anything other than your own affairs... the same applies.
It was only when we were trying to find the race rules and various other important documents, that we realised Leslie had filed these articles into the 'nonsense' section of his brain. Consequently we hadn't got a clue just what we needed to partake in the race other than a few basics. The vast bulk of what we needed had probably found it's way overboard.
However by asking around the other boats and attending the last minute meetings we pulled it all together.

It may have been down to this apparent lackadaisical approach of Leslie's to such red tape that there was a strong feeling that at every stage, the organisers seemed doggedly determined to not allow Irene to sail.

With each request that we adhered to they would make up more irrational and unreasonable ones. As equally determined we would adhere to their inane rules applied only to us out of the sixty something boats taking part.
We blagged the 'correct' HF Radio Set; we brought the up to date to the hour charts; we added more flares; we bought ugly canvas name boards for the boat; we individually numbered and named our jackstays; we flew their flags; we attended their review meetings; we managed to get the right crew over 21 to those under 21 ratio just right, we walked their walk and talked their talk. Yet it still wasn't enough.


By the end of a week in Waterford and boat check after boat check they reluctantly allowed 'Irene' to sail, calling us master blaggers and bluffers.
Not without one parting shot. His name was Anderson. He'd never sailed before and had signed on to the race for some experience.
The Tall Ships people decided that on the morning of departure that we were the boat for him. This put our crew ratio off kilter. The rules state that there must be no more than 50% of the crew over 21. Andreas was 26. We were pleased to have him along.
An hour to leave for the start line, we were taking part any way. We had a crew on board that wanted to get to Greenock, so Greenock it was to be.
So off we went, our tired liaison officer (who had done everything in her power to help Irene) waving farewell to the crew which were:

We made our way down river to join the fleet at the start line. Though it was as we were setting the sails we realised that there was nothing rigged up for the Main Topsail. It is essential to have all of a sailboats sails ready to set once you are in a race. The rules specified that engines were not allowed.
We hove the boat to and got on with the work. This was in fact a great way for the 'green' hands to start learning the ropes. I include myself in this as I had never sailed a gaff rigged boat before. Other than the seamanship side of things I was new to this too.

Leslie growled orders and we worked to get the job done. Paul shouting down periodically from the top of the mast what needed to be done as Leslie made sure he did the exact opposite. Eric was asking the girls for cups of tea, singing at the sea birds and shouting randomly in true stereotypical Scottish, things like 'Bop!' and 'Och aye'. Every now and again he would bark things at the air such as, 'LIVERPOOL MAID', or 'Where's my tea!?'
Eventually we had the Main Topsail flying high above the other sails. The sun was out and Tammy was busy taking her amazing photos and mingling with Shannon.

Because of this faffing around we crossed the start line over an hour after the race had begun. Not only were we last in our class, we were last overall with the wind decreasing by the minute.
A good start... 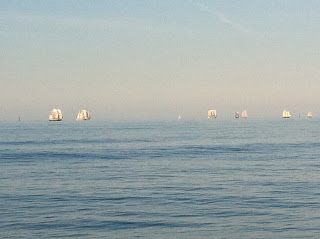 The fleet miles ahead, taken from behind the start line.