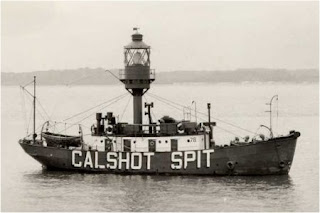 So I think that before I actually start telling you about what I see, hear and smell whilst at work. I should probably give those of you that don't know, a brief story of what Trinity House actually does! The following words have been taken mostly from the Trinity House website, it is all polished off with a link to said site for anyone wishing to indulge a little further.

The Corporation of Trinity House's prime concerns are the safety of shipping, and the well being of seafarers. These have been at the top of the list since a Charter was granted by Henry VIII in 1514.

Still interested?! Blimey! Here's a bit of history for you then...
The first official record is the grant of a Royal Charter by Henry VIII in 1514 to a fraternity of mariners called the Guild of the Holy Trinity. In 1604 James I conferred on Trinity House rights concerning compulsory pilotage of shipping and the exclusive right to license pilots in the River Thames.
Until responsibility for District Pilotage was transferred to Port and Harbour Authorities under the 1987 Pilotage Act, TH were Pilotage Authority for London and over 40 other Districts, including the major ports of Southampton and Harwich.

The first lighthouse built by Trinity House was at Lowestoft in 1609, which was part of a series of lights to help guide vessels through a maze of sandbanks between Happisburgh and Lowestoft. The lighthouses were paid for by a levy charged on vessels leaving the ports of Newcastle, Hull, Boston and King's Lyn, a method of payment which is similar to the current light dues system that remains in use today.

The next two hundred years saw an increase in lighthouses being built, a vast amount being privately owned. Owners could find themselves becoming very rich from the dues collected from Ships entering into port. The reliability of many of these private lights left much to be desired and so in 1836 legislation was passed for all private lights in England, Wales and the Channel Islands to be compulsory purchased and placed under the management of Trinity House.
www.trinityhouse.co.uk
Posted by Shipwreck Thom at 16:46