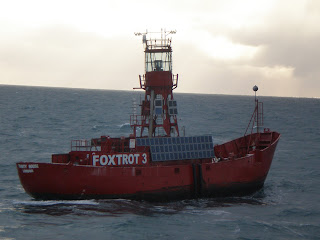 Here is Foxtrot 3
Here is Foxtrot 3. The first light ship that I set foot on. This was actually in January, though I have only just acquired the photos from one of the cadets on board. My job here was pretty much the usual Trinity House deckhand job. Grease what needs greasing, replace what needs replacing and to find a way through the bird shit. I don't know what it is about lightships but birds love crapping on them!
You'll generally find lightships in areas too deep or unsuitable to construct a lighthouse. This one is at the Eastern entrance to the English Channel. Being the busiest shipping lane in the world you can understand the need for a light that can be seen for 19 nautical miles. 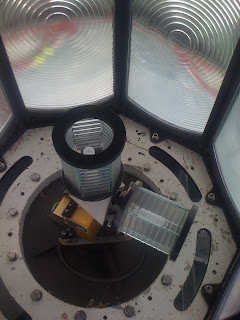 19 nautical miles! From a car bulb?! Yes. It's not the lighting that's the clever bit but the lenses they use to project the light. Amazing. Nine out of ten people get really excited when I say I can get them one of these, thinking that they're gonna be bigger than their head. 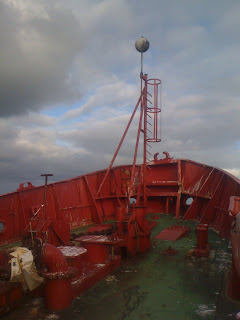 If you can manage to see through the bird shit you'll notice the damage on the bow from an impact. I find it quite amusing that they are hit so often.
' Sorry sir I didn't see it?'
'See what young fellow?'
'That fecking great big light on top of a fecking great big pile of red birdshit.'
Maybe it happens more when it's foggy. Though there are two clever sensors that send signals to each other. When the signal is broken by something such as fog or mist, the alarm sounds. Very loud indeed. That get's pretty boring pretty quickly when you're trying to work with such an abrasive din. Still. It's nice to know that it works. 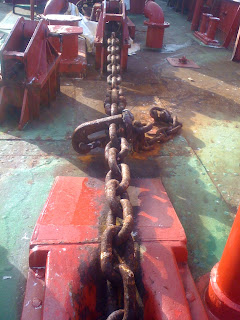 The above picture shows a great big jammer. This stops the chain from rolling out if the windlass breaks.
'Where does the chain go?'
I'm pleased that you ask. Follow the chain to the depths of the sea and at the bottom of it you'll find a great big shackle, and on the end of the great big shackle is a great big mushroom shaped sinker weighing around 5 tonnes. These rarely drag. If however they do then they have a drag alarm to alert trinity house that it is moving.
Imagine living aboard a boat that goes nowhere, for weeks at a time and with no company other than two other men. Other than a few provisions you'd eat what you caught, the only change in scenery as you sail to no place are the boats that pass you by.
What would you do with your time? Well, tend to the light of course, maybe even on occasions carry out a rescue (this happened, though rarely). Roll a rollie, through out the rod and have a fish. Though by the nature of this work from a modern stand point I have a feeling you'd spend a lot of your time cleaning, greasing, chipping and painting.