When the oil dries the wind shall rise!

This is a dead oil rig. 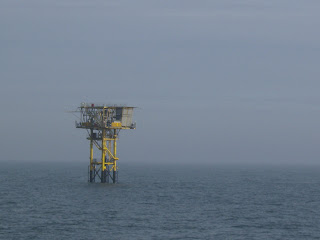 Once the oil is depleted, the rig proved uneconomical or too old for purpose, a transformation occurs. All of the useful gear that was there is stripped away. This also includes any navigation equipment to warn vessels of its presence. So to ensure that it is visible there are cardinal markers placed around the structure at a distance of 500 meters.

The diagram below shows how the 'place of interest', or our oil rig is marked. This is the case for most hazards at sea. 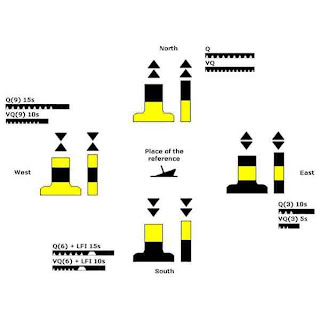 At night they will flash white to direct a vessel around the hazard. An easy way of remembering what does what is seeing them as a clock.
N- A continuous flashing.

S- 6 followed by one long (In a rough sea you may not catch all of the flashes, the one long at the end emits any confusion)


SO! The Buoys are in place, situated 500 meters from the rig. But what next?
We move the buoys from here... 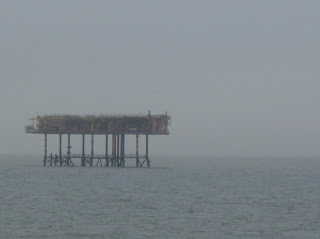 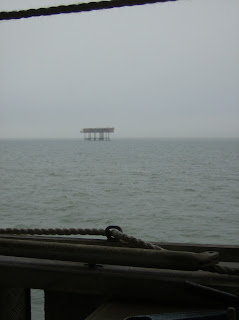 Now they will lay at a distance of 1500 meters from the hazard. This gives the removal men and women the room they need to break down the rig. To manoeuvre ships,  swing on anchors and whatever else they need to undertake such a task. The rig itself will be broken up to the level of the sea bed or below and will no longer pose a threat to navigation.

We shall be seeing the numbers of oil rigs in the North Sea diminish and perhaps even be obsolete entirely within the next 25 years. For reasons why, I'm not privy to such information. I can merely speculate that the 50 years worth of oil that was previously thought to be in these wells, was a figure based on a population that has been exceeded.

As the horizon clears of such structures, it shall in the near future be host to masses of wind farms, some as large as 25 square kilometers.
Funny really, for the three weeks I spent out there there was piss all wind.

There was however plenty of sea, a sea that is host to strong tides and, at times, large waves. This begs the question; Why not use tidal or wave 'farms'? Sea bed tidal generators being planned for the Orkney area should prove to generate as much as 1.2 GW of energy. This rivals some major nuclear power stations! Maybe it's the vast infrastructure that would have to be installed to allow such endeavours to flourish. There would be a need for new ports and a new grid to wire up to the existing one.
Maybe someone somewhere will see that the investment would be worth it, to light up 75,000+ homes on a resource that is always there and always creating energy.