The Final Voyage of the Dawn Treader

Where sky and water meet,
Where the waves grow sweet,
Doubt not reepicheep,
To find all you seek,
There is the utter East.... End of London. Namely, St Katherines Dock!


Gracing us with their presence amidst a gaggle of journalists and presenters were Prince Caspian, wearing his girlfriend's cardigan and Eustace Scrubb, who may I say is a very polite young man. They would spend the entire day locked in the hold giving interviews to the world's media regarding the pending DVD release of the latest Narnia flick.
The journalists, whilst waiting for their time with the cast, would be kept occupied by learning the ancient art of sword-fighting. Not happy with the low fatality odds of such a sport they were also made to climb to the crows nest. Needless to say all survived and a good time was had.

How did I go from marking oil rigs to this?
Here's how!

Drive as fast as you can from Harwich to Ramsgate, the town of the dragon makers. Or, the last stop before London where one can logistically turn a medieval caravel into a dragon. 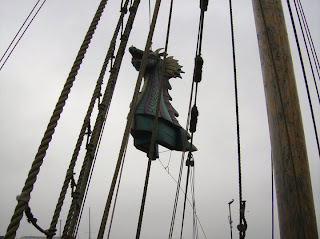 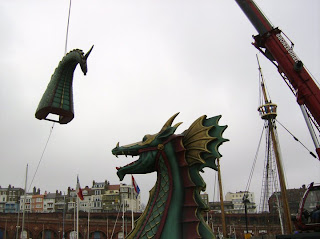 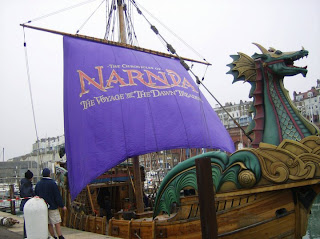 One fully functioning Dawn Treader.
The trip through to London was mostly non eventful and quite relaxing. We did find that the moon being the closest it has been to earth in 19 years upset the tides a little. Consequently we spent an hour grounded in the entrance to the Thames estuary. Did we panic? Of course not. We ate dinner and played music until there was enough water to float us through to our anchorage near Tilbury Fort.
The morning saw us motoring into a sun stricken London, where at Greenwich we picked up a small boarding party to continue on to St Katherines Dock.