This is the Matthew. A replica fifteenth Century Caravel. This is my new job. 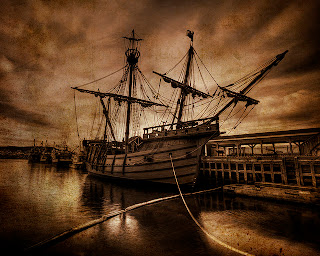 In 1497 John Cabot and 17 other men left the port of Bristol to find an alternative trade route to Asia by sailing west. Far from reaching Asia they reached the shoreline of what Cabot called his "new found landes", now known as Newfoundland in Canada.
500 years on, 18 men of Bristol replicated the journey. 1998 saw the Matthew return to it's home port to a grand reception!

Unfortunately for the ship, a promise of a mooring and visitor centre was not adhered to. The little tall ship was taken on by The SS Great Britain, Brunel's big o'l boat.
The SSGB is a charity, and ultimately the Matthew would detract revenue meant for the SSGB. So for 13 years she has sat behind an uninviting metal security fence. Poorly advertised and mostly forgotten. We weren't even allowed to ask for donations to maintain the ship. Any penny being spent on the Matthew was not a penny that the SSGB would see.

To solve this, a former Lord Mayor of Bristol and a bunch of other people set up the Matthew of Bristol Trust.
This is fantastic news for now the Matthew is finally it's own entity. Any Legacies left and profit made can be put back into the ship rather than being hoovered up by the SSGB through some clever pants legalities that they had put in place. Hopefully the Matthew shall have it's very own mooring and truly be one of the few Jewels in Bristol's floating harbour!

Running it on behalf of the Matthew of Bristol Trust shall be Shipshape and Bristol Fashion. It is these guys that have been renting the ship from the SSGB for a good number of years now. These guys that I shall be working for from this coming Thursday!
What'll we get up to? Wellity, wellity wellity...! the Matthew can be visited in Falmouth until Easter. Here you can jump aboard and enjoy day sailing in the sun, a pasty in hand and drink in the other! If you really want to, you can put down the pasty and pull some ropes to get us sailing faster in to the sun.

Cruise to The Isles of Scilly for the international gig racing.
Come to the Channel Islands or France for a booze cruise.
Or just find us and say hello.

www.matthew.co.uk
The Matthew on Facebook
I hope that you enjoy the new flavour of Blog-O-Gramme that I shall be producing. A far cry from the commercial marine sector, I hope that my zest and love for the Matthew and the oceans shall become more apparent from the time I spend at sea whilst aboard this wonderful little big boat.
Posted by Shipwreck Thom at 07:50